Creating a budget can be done in many ways, ranging from the extrapolation of the data from the previous year, up to a clever calculation on the basis of certain assumptions. In practice of most SME companies, an upcoming conversation with the bank is the reason to make a budget. For larger companies it is a financial conversion from the point of view of a company’s business that will be used in the periodical budget cyclus.

It is the purpose of a budget to set a goal, with which the company is able to measure periodically whether the organization is on track. This is usually a monthly budgetcyclus, used to make a good comparison possible and if necessary to adjust from time to time.

In CashController, we try to make it as easy as possible for you for instance to create a budget based on historical data. Or making a long-term budget based on your budget of the first year. We have developed a wizard for this that saves you a lot of time. 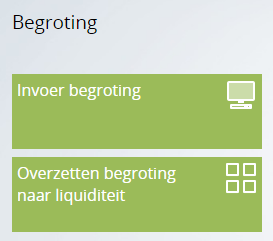 In this part you can use a wizard, that makes it possible for you to make e longterm budget immediately, without losing precious time. 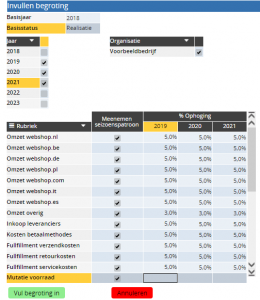 This way, you can choose any year as the base, and the way in which these figures must be continued in the years ahead. You can determine which category            must be used and which growth-% must be applied. Or whether the seasonal patterns should be taken into account. So it takes you very little time to make an initial budget.

What also is especially useful is the ability to base your budget on forecast figures. Which is handy because you always want to create your budget based on the most current information. So suppose you want to draft an initial budget in October for the next year, you can use the most actual forecast figures, meaning the actuals until September and the budget until December. This forecast can then be used as a basis for the initial budget for the next financial year. That saves you a lot of figure crunching and you can again adjust every month without any extra time.